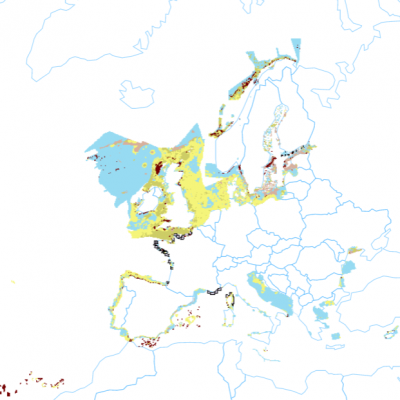 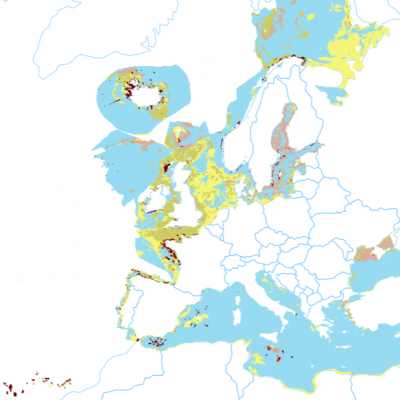 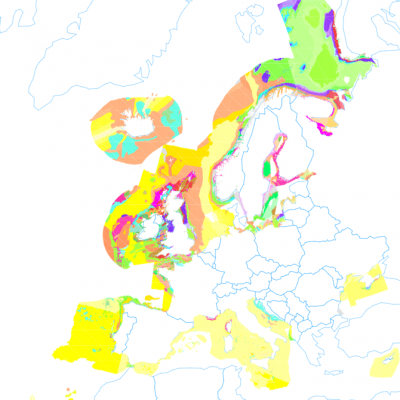 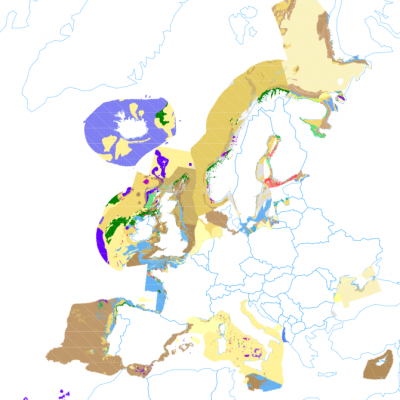 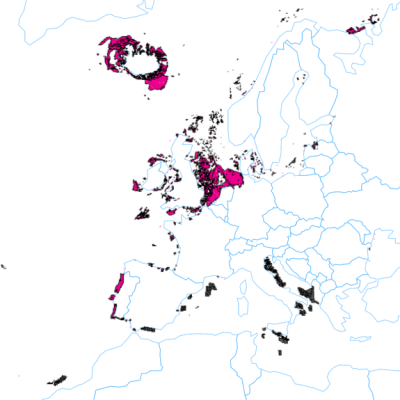 It is one of several EMODnet portals with the purpose to strengthen blue growth in Europe.

EMODnet Geology have updated the “Submerged Landscapes” data product. This fully attributed GIS layer now comprises of more than 16,000 features representing 27 classes of submerged landscape and palaeoenvironmental indicators including mapped and modelled palaeocoastlines, evidence for submerged forests and peats, and submerged freshwater springs across all European seas. “This update has almost doubled the features and information compiled previously”, says Heather Stewart, coordinator of the EMODnet Geology team responsible for the work on submerged landscapes.

With this ambitious and growing product, EMODnet Geology hopes to serve new groups, projects and initiatives. These harmonised products will underpin regional palaeogeographic reconstructions at 20000, 9000, and 6000 years BP during the next development phase.

Sea level is known to have fluctuated by more than 100m over repeated glacial cycles, resulting in recurring exposure, inundation and migration of coastlines not only across Europe but worldwide. Landscape response to these changes in sea level, and the preservation of these features on continental shelves around Europe, are an invaluable resource for improving our understanding of human history and environmental change over geological time, while also providing data for potential use in examining future sea-level rise scenarios. “With preservation of these now submerged features under threat from commercial activities and natural erosion, bringing together existing knowledge through delivery of this work package is timely”, added Ms Stewart.

Europe’s coast is as diverse as its people. It reflects a history of rock formation and disintegration that is many millions of years long. One of its main characteristics, coastal type, shows the combined effect of geology and human influence. Together, these have a direct influence on vulnerability and resilience to climate change. Hard rocky cliffs, soft sandy beaches, pristine estuaries and man-made harbours are all intertwined with our economies in their own particular way. They affect our short- and long-term safety, and are a big part of our well-being. Being able to visualise coastal type from Iceland’s western fjords to Ukraine’s eastern sand spits sets the stage for sustainable long-term coastal policy.

The new EMODnet Geology map on coastal type builds on the EUROSION map of coastal type released almost twenty years ago. It fills gaps and gives a first-order indication of vulnerability and resilience for policy makers, identifying areas of potentially irreversible future change.

EMODnet Geology updated their sedimentation rates data product. The data is compiled from all available information on the rate of sedimentation in European maritime areas, provided by EMODnet project partners from their national waters (incl. EEZ). The information on sedimentation rates for recent sediments is presented as point-source information. The focus is on the present-day sedimentation rates. That means sediment accumulations to the seabed over the past decades, since AD 1900 or so. Estimations of modern sedimentation rates (centimeters/year) can be based, for example, on established historical records of anthropogenic radionuclides (e.g. 137Cs and 241Am), lead (Pb) and stable lead isotope (206/207Pb ratios) as well as on data based on annually laminated sediments. Sedimentation rates data consists of more than 1500 data points at this moment. Knowledge on sediment accumulation rates in a specific area provides a better understanding of geochemical processes and benthic organisms functioning. It is important, also, for the maintenance of shipping lanes and the stability of offshore constructions like wind farms or oil platforms. The data of the sedimentation rates are freely available for visualisation and download on the EMODnet Geology portal. 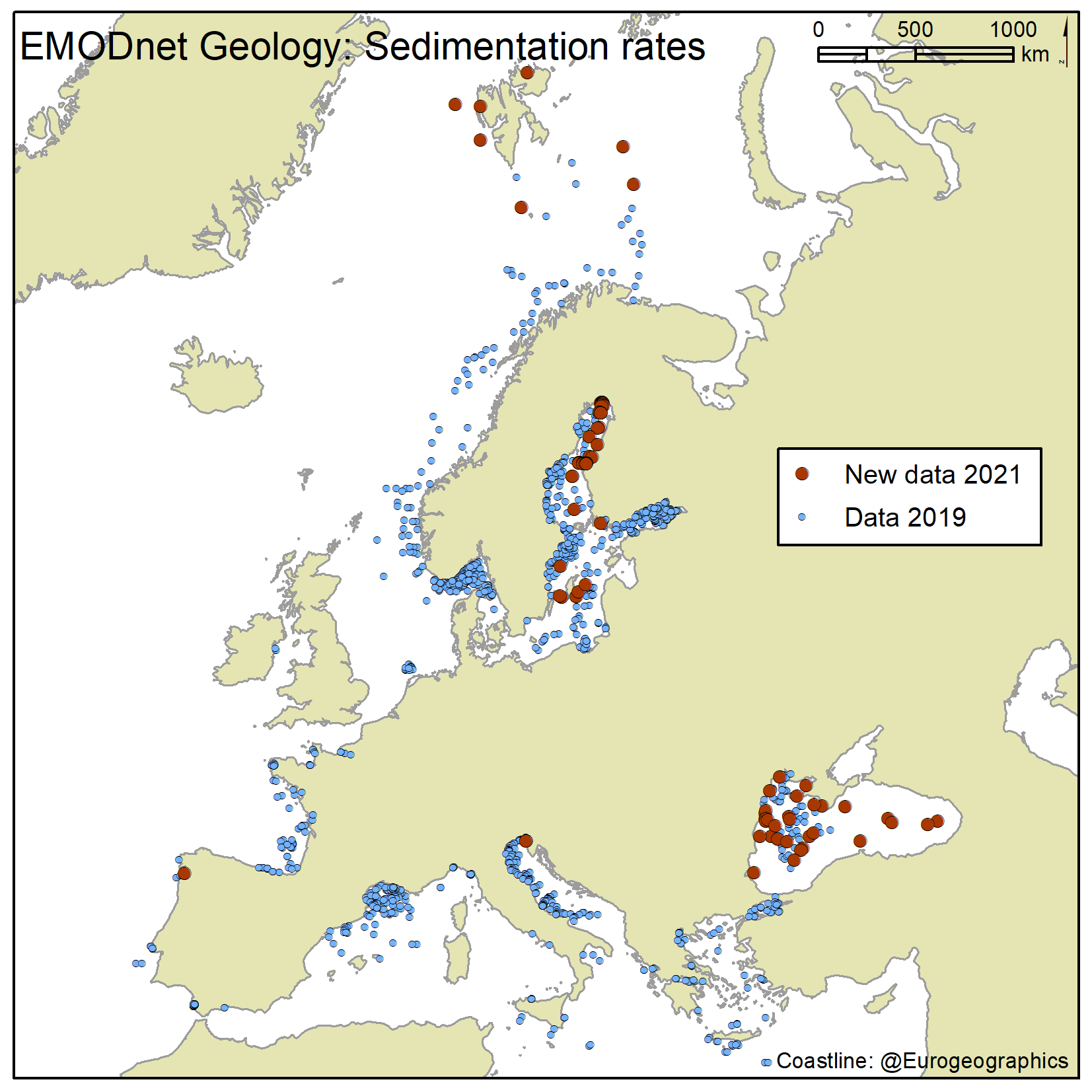 The new EMODnet Geology shoreline-migration map, released today and freely accessible from the EMODnet portal, allows policy makers, together with national and regional coastal managers, to determine large-scale coastal behaviour and identify areas of rapid change. It is based on field measurements and aerial photography, and covers time periods up to decades. The map is particularly valuable for cliffs, which are prevalent along European coastlines, particularly since state-of-the-art satellite-monitoring methods aren’t yet suitable for imaging erosion of non-sandy types of coastline. 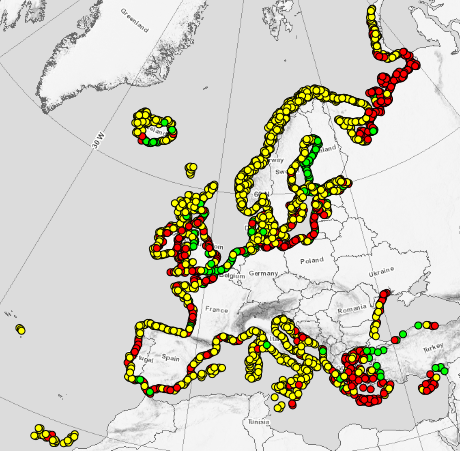 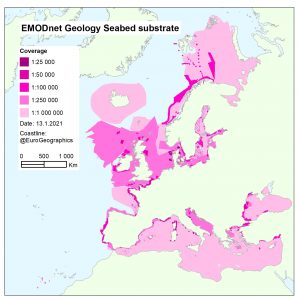 Within EMODnet Geology, the German Federal Institute for Geosciences and Natural Resources (BGR) (work package leader) compiles and harmonises the European marine geology map data with regard to geomorphology, pre-Quaternary and Quaternary geology. The three data layers released today on seafloor geology show the underlying geology from the Ancient Past (more than 2500 Million years ago) to modern Quaternary deposits and geomorphological features. From it we can read the story about Earths Evolution in the European, marine part of our planet Earth, i.e. from the oldest rocks and how they form, to the youngest rocks and geomorphological features representing the most recent geological and environmental changes.

A variety of target users include scientists and researchers, governments, employees from fisheries and industry, environmental agencies and tourism. In particular, the layers provide information about structures on the seafloor important for geoscience research, and investigations of future exploration of mineral and energy resources but also of biological resources. They are also a source of knowledge to show features of the seafloor geomorphology valuable for habitats of numerous species (fisheries, tourism). In addition, the layers provide information on the seafloor conditions to plan building infrastructures (such as wind parks, or a pipeline or a protection area for endangered species).

“Geology does not know political boundaries, neither at sea nor on land”, says Kristine Asch, work package leader. ”EMODnet geology will help users from science, governments, industry, fisheries and tourism to find and apply overview and detail geology data of any part of the European Seas”.

New datasets about “Geological Events and Probabilities” are now available on the EMODnet Geology Portal. The EMODnet Geology team responsible for the work package “Geological Events and Probabilities”, led by Geological Survey of Italy – ISPRA, has realised broad ranging systematic mapping of Geological events and deposits they originated, detected in sea areas surrounding Europe. Data have been either directly acquired by Partners’ surveys or obtained by cooperation with third parties or retrieved in the literature. Each EMODnet Geology Partner has validated final data regarding marine areas surrounding his country. Read more… 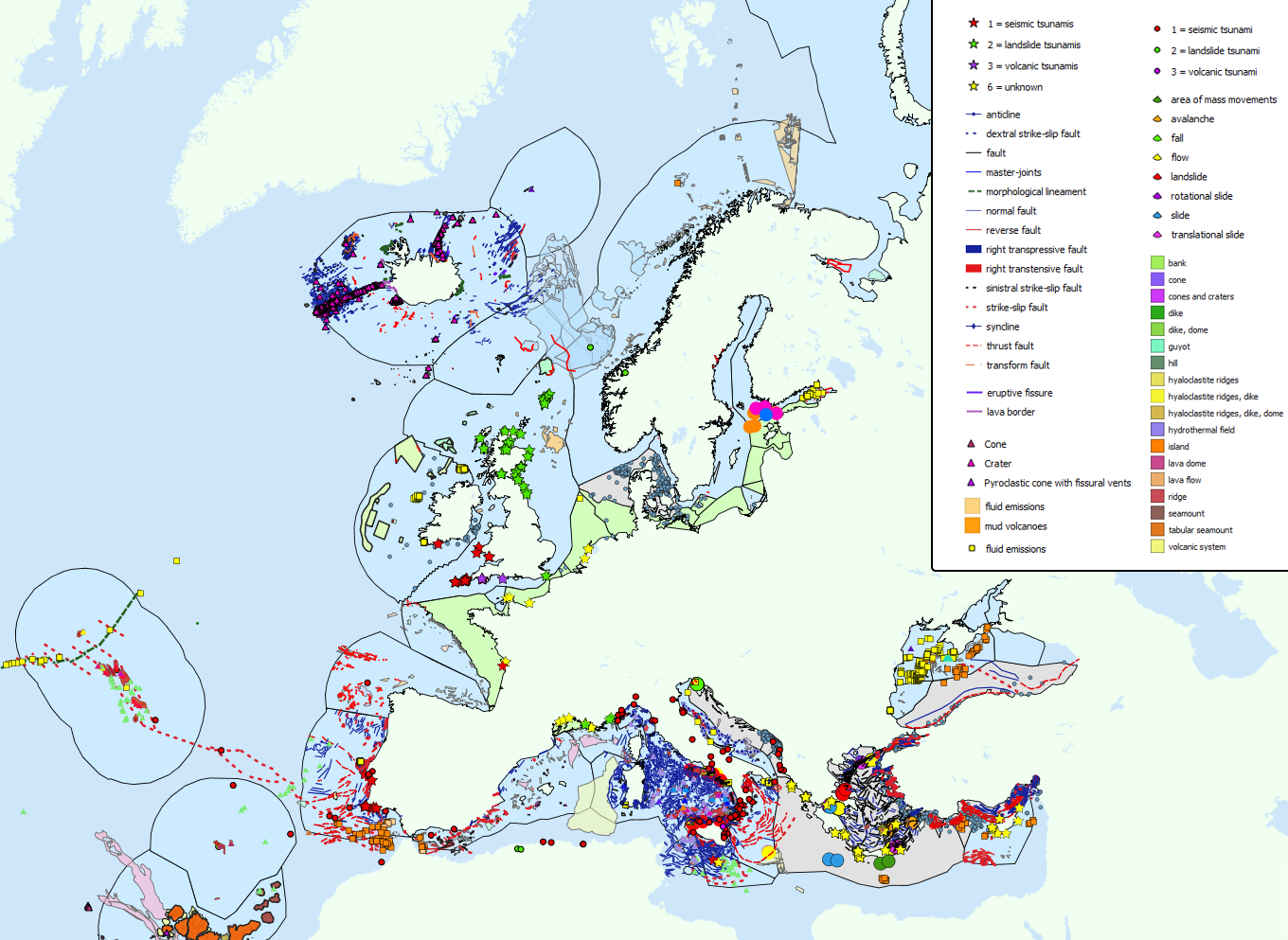 The harmonised and multiscale maps of the seabed substrate have been released today by EMODnet Geology. Diverse national seabed substrate data classifications are brought together, harmonised and collated using the Folk classification system of 5, 7 and 16 classes. The maps illustrate seabed properties at different scales – 1:50 000, 1:100 000, 1:250 000 (250 k) and 1:1 000 000 (1 M) – covering all European maritime areas in one product. The broad scale data (250 k and 1 M) describes the seabed substrate at a general level, suitable for the decision-making, research and large-scale spatial planning. More detailed scale data are needed, for instance, for habitat mapping purposes and planning local constructions like wind farms. The maps of the seabed substrate are now available on the EMODnet Geology portal. 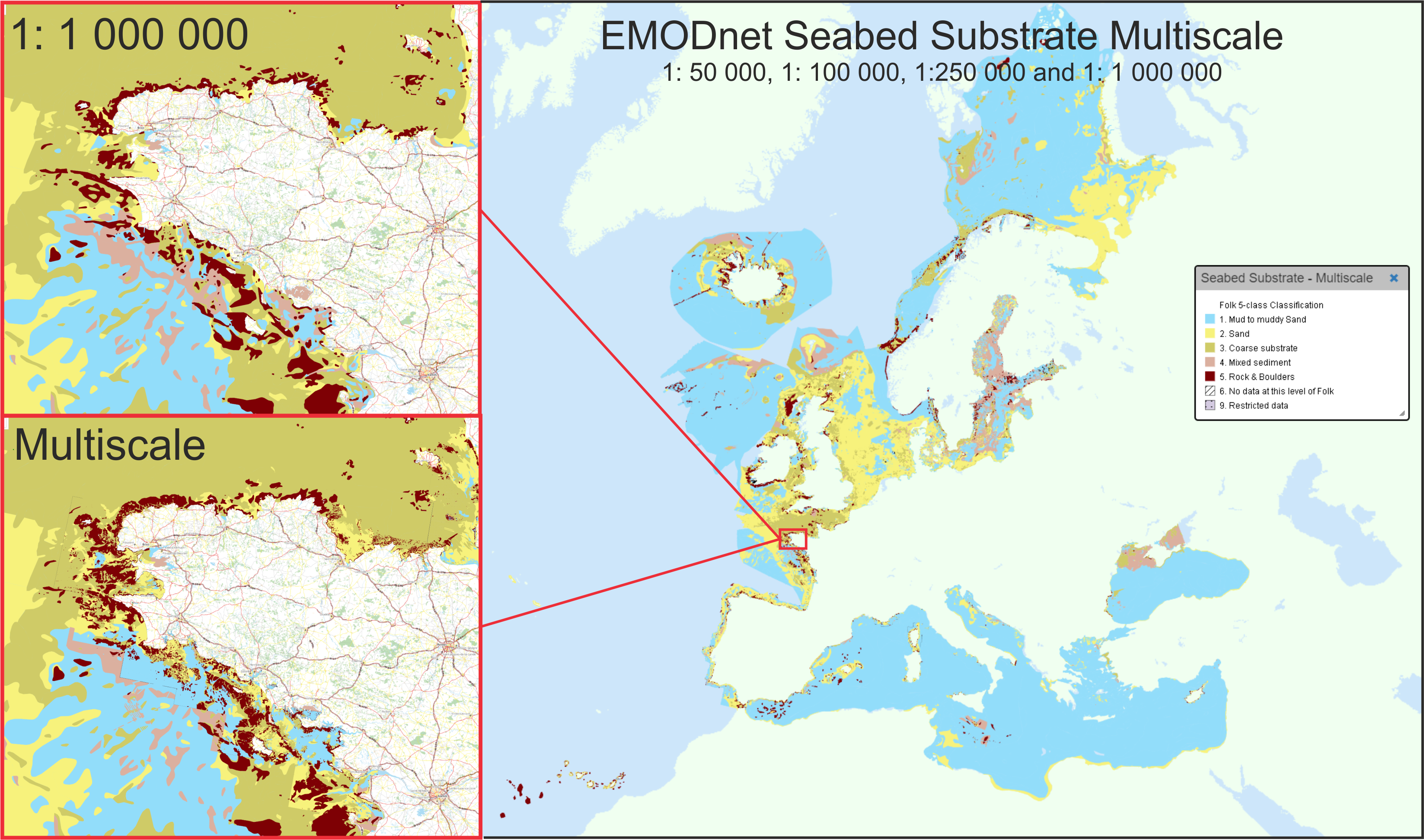 Sea level is known to have fluctuated by more than 100 metres over repeated glacial cycles resulting in recurring exposure, inundation and migration of coastlines not only across Europe, but worldwide. Landscape response to these changes in sea level, and the preservation of these features on continental shelves around Europe, are an invaluable resource for improving our understanding of human history and environmental change over geological time.

The EMODnet Geology Team responsible for the work package on Submerged Landscapes, led by the British Geological Survey with project partners from Russia to Iceland, Turkey to Portugal and all European maritime countries, has delivered a compilation of submerged landscape features and palaeoenvironmental indicators, including estimated age where known. The fully attributed Geographic Information System (GIS) layer will be used to underpin palaeogeographic reconstructions across various time-frames. Read more… Mapping the spatial extent of marine mineral occurrences within European waters allows us to communicate their extent visually, using one common data standard and at one common scale. It is hoped that these seabed mineral deposit maps will be useful to policy makers, planners, industry and society. Read more… 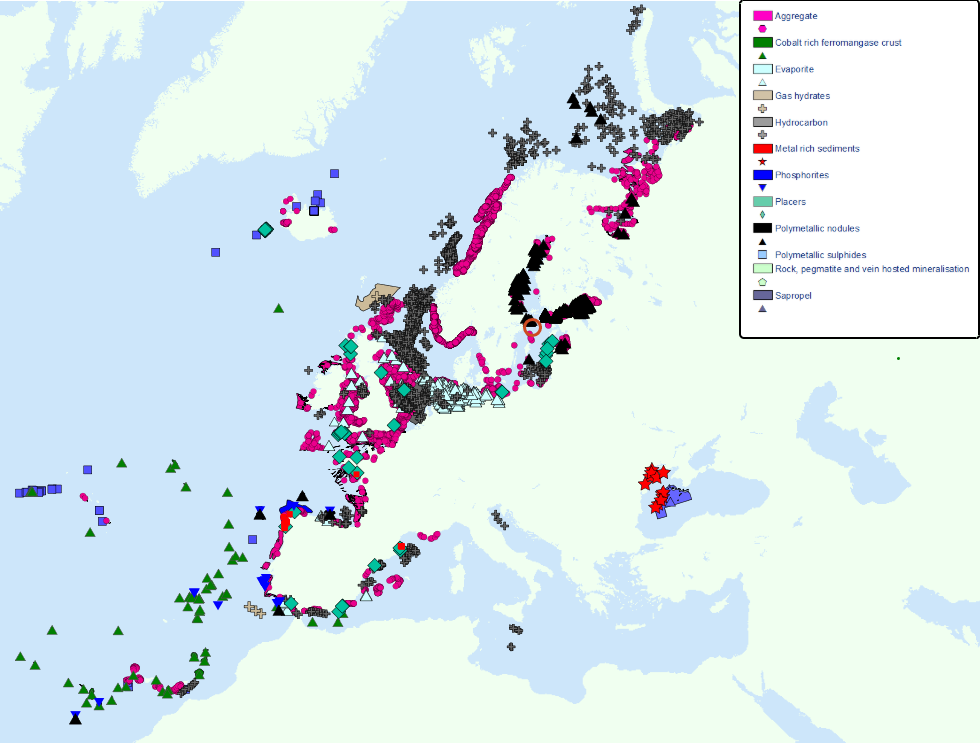 Traditionally, coastline-migration maps, showing erosion and accretion at the fringes of marine and lacustrine water bodies, have been made using field-monitoring data, supplemented locally by analyses of aerial photography. The EMODnet-Geology coastline-migration map is a good example. It provides an overview of our current knowledge and is useful in transnational coastal-zone management. At the same time, it is far from perfect. Read more… 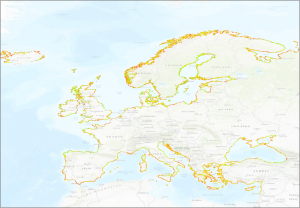 Some users of the EMODnet-Geology coastline-migration maps have noted that the coastline as shown in green (accretion), yellow (stable) or red (erosion) does not always match with the ‘official’ present-day coastline. Understandably, they wonder if a mistake has been made. The answer is no. Read more… 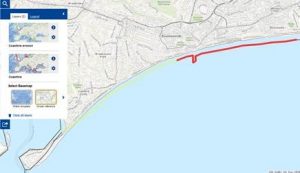