Home » » Why may a mapped coastline differ from the ‘official’ coastline?

Why may a mapped coastline differ from the ‘official’ coastline?

A mismatch not made in heaven

Some users of the EMODnet-Geology coastline-migration maps have noted that the coastline as shown in green (accretion), yellow (stable) or red (erosion) does not always match with the ‘official’ present-day coastline. Understandably, they wonder if a mistake has been made. The answer is no. 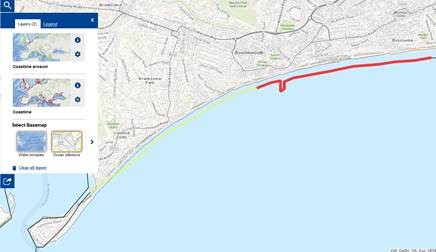 What and where is the coastline?

When you’re strolling along the beach or sitting at the edge of a cliff, you can see that the waterline moves landward and seaward as waves break and the tide moves in and out. This short-term variability shows that the coastline isn’t a line at all. Rather, it is a band within which the land-water boundary moves. Along sandy coasts, this band stretches from the low-tide line to the dune foot, at least during fair-weather. Nearshore bars exposed during low tide are a further complication: along a single coastal transect, there may be multiple coastlines, so which one do you choose to map? Along bluff and cliff coasts, the edge at the top is most easily mapped. It forms the landward side of the coastline band and behaves very differently from the base down below and from the low-tide line that is still farther away.

Longer-term changes, which include the effects of erosion, accretion and sea-level change, increase this band width even more. Observations of coastline change for a certain period are most commonly plotted at a position marking some point within the coastline band at the time of measurement or map preparation. Clearly, this position will only correspond to the present-day coastline when no erosion or deposition has taken place in the meantime and the same coastline indicator has been used.

Why shouldn’t we project legacy data onto the modern coastline?

It is tempting to project monitoring data from the past onto the interpreted ‘official’ coastline as available through the European Atlas of the Seas. Doing so, however, would be misleading. By showing a legacy value of erosion or deposition at its original position, we highlight the fact that something has happened in the meantime and that this value may not necessarily apply to the present-day situation. Even where the two lines do correspond, the user must be aware of the fact that coastline behavior changes through time. Map color and the data behind it must be considered with caution. As with investing, past performance is no guarantee of future results!