Coastal behavior refers to the movement of the coastline in a landward (through submergence or erosion) or seaward (through emergence or accretion) direction. EMODnet Geology provides two pan-European maps, one based on field monitoring and comparison of aerial photographs, and the other based on satellite data.

Our coasts play a key role in Europe’s economy, safety, coastal-zone environment and well-being. One of its key characteristics, the ever-changing land-sea interface, has been monitored in the field and from the air for more than a century, and with satellites since the 1970s. This shoreline is continuously shaped by wind, waves, tides, and human influence. Shoreline change is strongly influenced by climate change. Coastal erosion in particular is exacerbated by global sea-level rise, which will put Europe’s shorelines – and others around the world – at increasing risk in the coming years. Knowing how, and at what rate, our coasts are changing is a crucial step to their sustainable management, supporting knowledge-based decision-making and thus underpinning the EU Strategy on adaptation to climate[1]. This information helps the EU move towards becoming a climate-resilient society.

The new EMODnet Geology shoreline-migration map, released today and freely accessible from the EMODnet portal, allows policy makers, together with national and regional coastal managers, to determine large-scale coastal behaviour and identify areas of rapid change. It is based on field measurements and aerial photography, and covers time periods up to decades. The map is particularly valuable for cliffs, which are prevalent along European coastlines, particularly since state-of-the-art satellite-monitoring methods aren’t yet suitable for imaging erosion of non-sandy types of coastline.

“Effective planning for adaptation to climate change must be underpinned by high-quality data. The new EMODnet shoreline-migration map provides the most up to date and comprehensive information for coastal and marine industries, decision-making bodies and scientific research. Providing pan-European, regional and local data, it helps enable efficiencies in planning and decision-making processes for a sustainable future”, stated Cherith Moses, Professor of Geomorphology at Edge Hill University (UK).

Pan-European overview maps of shoreline migration (red = landward; yellow = stable; green = seaward). Left, the updated map based on field data and aerial photography. Right, the 2019 map based on satellite monitoring. The map on the right has more complete coverage but tends to overestimate erosion of cliffed coasts.

This important data product allows users to visualise pan-European coastal behaviour at different spatial scales. A built-in search and zoom functionality enable online users to distinguish areas of landward migration (erosion or submergence), stability, and seaward migration (accretion or emergence). The underlying downloadable dataset offers additional information on measured or derived annual migration rates. The map is an update of the 2004 EUROSION map, now with additional spatial coverage. It should be seen as a companion product to the EMODnet shoreline-migration map based on satellite data, published in 2019.

The map also provides the general public with a useful insight into one of Europe’s most obvious climate-change effects: loss of land through coastal erosion. Most importantly, field and satellite data can now be compared on a pan-European scale, highlighting corresponding spatial patterns as well as prominent discrepancies that require further work to optimise and align the respective methodologies.

“This new EMODnet map adds real value for understanding cliffed coasts as well as muddy shorelines. Whilst the holy grail for consistent and reliable shoreline-migration mapping has yet to be found, this is a great step in the right direction, complementing pan-European satellite-coverage data products”, commented Sytze van Heteren from the Geological Survey of the Netherlands.

Seventeen years after the publication of the much-used EUROSION map, the EMODnet Geology team is releasing a second update of this important data product on shoreline migration. The new map released today is almost complete, with only the Caspian Sea, much of the Black Sea and small parts of the Mediterranean Sea still forthcoming. Also, many older datasets have been replaced by more recent or accurate information. At a local scale, results are rendered in their original format, as line segments. At regional to pan-European scales, these line data are simplified into point data by averaging values for shoreline stretches of increasing length.

The original spatial resolution of classified map segments depends on the method used to analyse shoreline change. Where aerial photos were used, the scale can be as fine as 1:5000. Where field-monitoring data were used, the distance between profile lines may be tens of kilometres. For many rocky areas, data are absent altogether and geological expert knowledge was used for making informed assessments of shoreline change.

Visualising pan-European shoreline change means making choices, like defining when a shoreline is classified as stable. Using zero change or a small range of values is more appropriate for hard rocky coasts, while a larger range of values is preferable for naturally dynamic sandy barrier islands that may recover following an erosion event. As a compromise for the web service, annual change rates of +/- 0.5 m were selected for the stable category. The new map can also be downloaded as a GeoPackage, providing users with the capability to adjust this range.

The EMODnet Geology consortium hopes that by releasing this updated companion product to the 2019 earth-observation dataset, coastal experts and other end users will be able to discover and communicate possibilities and limitations of both maps, and to help raise awareness of cliff erosion in particular. 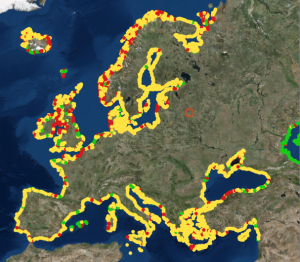 The shoreline is a highly dynamic land-sea interface that provides important services such as ecology, flood protection and recreation. It is constantly modified by wind, waves and tides, and impacted by human activity. Hence, the decadal change of shorelines reflect natural processes as well as human influence, whether positive or negative. Climatic-driven changes such as sea level rise, higher waves and changes in wind direction put increasing pressure on many of Europe’s shorelines.

Knowing how, and at what rate, our coasts are changing is the first step to successfully managing them. The new EMODnet Geology shoreline-migration map, released today, allows users to visualise pan-European coastal behaviour for 2007-2017 at different spatial scales. A built-in search and zoom functionality allows online users to distinguish areas of landward migration (erosion or submergence), stability, and seaward migration (accretion or emergence). The underlying, downloadable satellite-based dataset offers additional information on annual values and uncertainty.

With the new map, international policy makers can determine large-scale coastal vulnerability while national and regional coastal managers are able to fill existing gaps in field-monitoring data and to identify potential areas of rapid change. The map also provides the general public with a useful insight into one of Europe’s most obvious climate-change effects. Most importantly, scientists may explain spatial patterns and provide feedback on methodological advantages as well as shortcomings, thus helping to optimise the big-data methodology used.

Henry Vallius, coordinator of EMODnet Geology, stated: “By visualising pan-European shoreline behavior for 2007-2017, EMODnet Geology is proud to provide the first open map of this kind since 2004 (last update). The map and dataset are available free of charge for viewing, downloading, processing and usage from the EMODnet Geology portal at www.emodnet-geology.eu.”

“This new map captures the recent evolution of all European coastlines over a 10 year time period – the added value of this satellite-based view compared to traditional maps showing fragmentary field observations is completeness and uniformity”, complemented Sytze Van Heteren from the Geological Survey of the Netherlands.

Thanks to the public availability of satellite data (optical imagery of ESA Sentinel 2 and NASA Landsat 5, 7 & 8 with pixel resolutions of 10-30 metres and a revisit time of 1 to 2 weeks) and new analytical tools for processing big data (such as the Google Earth Engine), the EMODnet Geology team in collaboration with Deltares and TNO (Geological Survey of the Netherlands) were able to quantify shoreline migration in a new way. Scripts for automated detection of the land-water boundary were used to separate land from water in annual image composites for the period 2007-2017. During this process, shorelines positions were determined for half a million transects every 500 metres along the European shoreline. These positions were then averaged by year and analysed for a decadal period.

Visualising pan-European shoreline change means making choices, like defining when a shoreline is classified as stable. Using zero change or a small range of values is more appropriate for hard rocky coasts, while a larger range of values is preferable for naturally dynamic sandy barrier islands.

The spatial resolution of the method depends on the pixel resolution of the individual satellite images, which is currently about 10 metres. Validations of abovementioned method have been carried out for sandy coasts but not yet for bluffs, cliffs and muddy coasts. EMODnet Geology hopes that by releasing the satellite-based dataset now, coastal experts and other end users will be able to discover and communicate possibilities and limitations of automated methods for the extraction of shoreline position and quantification of annual to decadal change. To help in this process, a companion map showing shoreline migration on the basis of field data and expert knowledge is also made available, thereby facilitating a first-order comparison.

Traditionally, coastline-migration maps, showing erosion and accretion at the fringes of marine and lacustrine water bodies, have been made using field-monitoring data, supplemented locally by analyses of aerial photography. The EMODnet-Geology coastline-migration map is a good example. It provides an overview of our current knowledge and is useful in transnational coastal-zone management. At the same time, it is far from perfect.

First, it combines monitoring series from different time periods, necessitated by an overall scarcity of data. For some regions, the only information available may be decades old. Second, it includes data gaps as many remote regions have never been surveyed. Quite a few of those gaps have been filled using expert knowledge from coastal geologists, but there are extensive stretches that must be left unfilled for the time being. Third, the coastline is not a single line that is easily and consistently recognized and used. Along sandy coasts, one can map the low-tide line, the high-tide line and the dune foot, and each of these indicators may behave differently through time. Along bluff and cliff coasts, one can map the bluff/cliff top and base, or the actual low- or high-water line some distance away. When part of a bluff or cliff collapses and thus recedes landward, its rubble accumulates at the base, moving the water line seaward.

The public availability of satellite data and new analytical tools for processing big data, such as the Google Earth Engine, enable us to look at coastline migration in a new way. Scripts for automated detection of the land-water boundary generate numerous data points for each part of the European coastline. When averaged by year and analyzed for a decadal period, these data points form the basis for a new pan-European coastline-migration map that covers a consistent time period relevant for present-day coastal-zone management, eliminates data gaps, and portrays a single coastline indicator that is assumed to correspond to the mid-tide land-water boundary. As part of EMODnet-Geology, Gerben Hagenaars at Deltares performed an analysis for tens of thousands of transects with a spacing of 500 meters, giving a map resolution of 1:1,000,000.

The need for validation

As the pixel resolution of individual satellite images is about 10 meters, the precision of the method is still limited. Calculating annual averages from multiple measurements within a year reduces this uncertainty, and validation for sandy coastlines with beaches shows the method’s accuracy. The usefulness of the resulting data is discussed in ‘The state of the world’s beaches’, an article published in Scientific Reports. For bluff and cliff coasts, such validation and further analysis still need to take place. Once published as an EMODnet Web Feature Service, we are keen to invite all users to compare our satellite-based output with corresponding field-monitoring data.