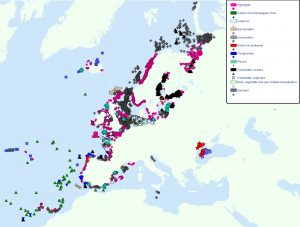 A variety of marine landscapes, submarine processes and relics of ancient environments evident throughout our oceans have resulted in different types of mineral accumulations on and beneath the seabed.

The EMODnet Geology team responsible for the work package on Minerals, led by Geological Survey Ireland with project partners from Russia to Iceland, Turkey to Portugal and all maritime countries, has accomplished broad ranging systematic mapping of recorded marine minerals known to accumulate in seas surrounding Europe. A first step consisted in creating unique data schemas that report important information for each of the twelve mineral types. National data on marine minerals were then formatted and provided by project partners. Later merged into mineral type layers, these maps and information are now available on the EMODnet Geology portal.

Information on the types of minerals has relevance to engineering disciplines including extractive industries, beach nourishment and reclamation projects. Those who draw policies on the designation of areas for protection as well as licencing for mineral extraction can use these data in planning. Environmental and climate scientists who may be interested in the sea level rise and chemical interactions within our oceans can glean useful information from some of the mineral types listed.

With Earth’s population growth, efforts to meet our needs for resources with indigenous supplies continue. Many minerals and critical raw materials form important components in low-carbon and resource-efficient technologies such as electric car batteries and solar panels. A project investigating the metallogeny and geological potential for strategic and critical raw materials on the European seabed called GeoERA MINDeSEA has been established and is already using EMODnet Geology Minerals data for analysis. “EMODnet Data on ferromanganese crust and nodules, rich in cobalt, tellurium, rare earth elements and other strategic and critical metals, have been used by MINDeSEA as starting points to produce the first compilation of energy-critical elements in pan-European seas”, said Javier González, coordinator of MINDeSEA, from the Geological Survey of Spain. “EMODnet-Geology data will be very useful to plan future research and exploration targets for minerals with exploitation potential and to define areas for environmental protection”.